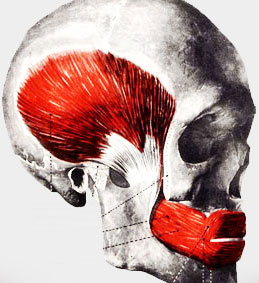 Temporal tendonitis (or, tendinitis) is perhaps one of the most common craniofacial pain disorders seen in clinical practice. Unfortunately, this widespread problem is frequently confused and misdiagnosed as an intra-articular temporomandibular joint disorder, tension-type headaches, or even maxillary sinusitis. The reason for this misdiagnosis is two-fold. First, temporal tendonitis is not well known or understood by the dental profession, and its existence is virtually unknown within the medical profession. Second, the symptoms of temporal tendonitis are similar to these other common disorders and therefore, dentists, physicians and chiropractors alike immediately make a diagnosis based primarily upon their training and background without further investigation.

Simply defined, temporal tendonitis is inflammation of the temporal tendon as it inserts into the coronoid process of the mandible. Dr. Edwin Ernest, Dr. Shankland’s mentor, demonstrated that microscopically, there is evidence of degeneration and temporalis muscle tissue cellular loss, as well as loss of the appearance of the tendon. This degeneration occurs in Sharpey’s fibers, which insert the temporalis muscle into the coronoid process.

The diagnosis of temporal tendonitis is relatively simple. Three criteria of the following four should be fulfilled in order to establish the diagnosis and to differentiate it from other disorders, particularly displacement of the ipsilateral temporomandibular joint disk.

First, historical reporting by the patient is important. Usually, the patient will recall an incident where his or her mouth had been opened for a long period of time. Gaining access for an endodontic procedure, a restorative procedure, oral surgery or intubation is quite commonly reported. Also, the patient may mention a recent increase in stress, which correlates with the onset of symptoms.

Further, he or she may report mandibular trauma from a fall or injury, which also correlates with the first recollection of symptoms.

Third is radiographic evaluation. Those suffering from temporal tendonitis, especially of a chronic nature, may exhibit elongation of the coronoid process in comparison with the ipsilateral condylar process, but also with the opposite coronoid process.

Lastly, the most accurate and definitive diagnostic test is a local anesthetic block of the deep temporal nerves, which provide the somatosensory innervation of the temporalis muscle and its tendon. The temporal tendon is actually comprised of two tendinous attachments, a long medial head and a shorter lateral head. Blocking the deep temporal nerves will greatly serve to reduce or eliminate all of the patient’s symptoms if the correct diagnosis is temporal tendinitis. Probably the most dramatic effect of this injection will be the elimination of the patient’s complaint of ear pressure.

One note of caution concerning the establishment of a diagnosis of temporal tendonitis: this disorder often presents concurrently with other craniofacial disorders, such as anterior dislocation of the ipsilateral articular disk of the temporomandibular joint, Ernest syndrome, myofascial pain dysfunction, or even maxillary sinusitis. So, if one diagnosis is an internal derangement of the joint, one should not overlook the possibility that temporal tendonitis is also present.

Treatment for temporal tendinitis is simple and straightforward. As with other inflammatory disorders, the real culprit is the inflammation itself. Treatment needs to be aimed at elimination of this natural, but destructive process. Treatment is either conservative or surgical. Conservative therapy consists of several steps. After anesthetic confirmation of the disorder a combination of an anti-inflammatory medication and a long acting anesthetic are injected into the temporal tendon. Sarapin is preferable to avoid the possible effects of steroid injections (viz, tissue necrosis, stimulation of osteonecrosis, and degenerative arthritis). An anti-inflammatory medication is usually prescribed as well. A soft diet is recommended and if the patients clenches or grinds when sleeping, an NTI appliance is usually used as well.