Osteocavitation Lesions are actually areas of ischemic bone disease, or areas where there has been a reduced or stopped blood flow within the bone marrow, which often produce orofacial pain.

Cavitations or NICO lesions are hollow places in jaw bones. These hollow areas may never cause pain or a problem. However, cavitations can produce trigeminal pain, headaches, and facial pain. Cavitations are common in all bones that have bone marrow. Many cavitations linger for years without producing facial pain. 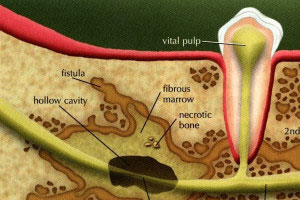 Most people know what we mean when we say cavity, but the word cavitation is confusing. Both of these words come from the same root word meaning hole. A cavity is a hole in the tooth, whereas a cavitation is a hole in bone. Unlike most tooth cavities, bone cavitations can’t be detected by simply looking at the bone, and even using x-rays, many cavitations are missed. The termed cavitation was coined in 1930 by an orthopedic researcher to describe a disease process in which a lack of blood flow into the area produced a hole in the jawbone and other bones in the body. Dr. G.V. Black, the father of modern dentistry, described this cavitation process as early as 1915 where he described a progressive disease process in the jawbone, which killed bone cells and produced a large cavitation area or areas within the jawbones. He was intrigued by the unique ability of this disease to produce extensive jawbone destruction without causing redness in the gingiva (gums), jaw swelling, or an elevation in the patient’s body temperature. Essentially, this disease process, which produces osteonecrosis (dead bone) is actually a progressive impairment which produces small blockages (infarctions) of the tiny blood vessels in the jawbones, thus resulting in osteonecrosis, or areas of dead bone. These dead, cavitational areas, which produce pain, are now called NICO (Neuralgia Inducing Cavitational Osteonecrosis) lesions (Figure 1). In his book on oral pathology, Dr. Black suggested surgical removal of these dead bone areas.