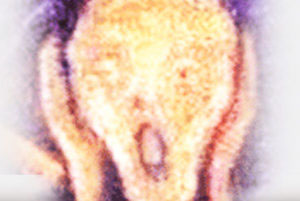 Myofascial Pain Dysfunction is a musculoskeletal problem which produces headaches, muscle pain and is often confused with a temporomandibular joint problem.

What Is Myofascial Pain Dysfunction?

Like fibromyalgia, myofascial pain dysfunction syndrome (MPDS) is a painful condition of the skeletal muscles. Many people suffer with both fibromyalgia and myofascial pain dysfunction syndrome (termed, FMS/MPS Complex) at the same time. One interesting difference between FMS and MPDS is that more women than men have FMS, but MPDS affects men and women in equal numbers. Usually, when we refer to MPDS, we are referring to the muscles of mastication as well as the neck and shoulder muscles. However, this doesn’t mean that other skeletal muscles aren’t affected for they may be. But the muscles of mastication and the neck and shoulder muscles seem to be most commonly involved. Some researcher feel that MPDS may be a minor or localized type of fibromyalgia.

MPDS is characterized by the development of trigger points. A trigger point or sensitive, painful area in the muscle or the junction of the muscle and fascia (hence, myofascial pain) develops due to any number of causes. This trigger point is locally tender and when active, refers pain through specific patterns to distant areas. Occassionally, trigger points produce autonomic nervous system changes such as flushing of the skin, hypersensitivity of areas of the skin, sweating in areas, or even “goose bumps.” Dr. Janet Travell has spent her life researching and describing MPDS by mapping the specific referred pain patterns of trigger points in skeletal muscles.

Factors which cause trigger points are as follows:

Like many musculoskeletal disorders, MPDS can be managed but rarely cured. However, this pain and misunderstood condition can be managed! Treatment of MPDS can only begin after an accurate diagnosis is accomplished. Even today, some doctors either don’t believe that myofascial pain dysfunction syndrome exists or they don’t understand its symptoms and treatment. Briefly, MPDS may be treated in the follow manner:

It’s important to understand that patients suffering with MPDS, just like TMJ, often need a multidisciplinary approach to treatment. In other words, one doctor or therapist can’t treat all the symptoms and problems associated with this painful syndrome. For example, a TMJ patient with MPDS (which is very common) often needs to be treated by a TMJ dentist, a chiropractic physician, a massotherapist, and a psychological counselor. Depression is common with MPDS, and few doctors have the expertise to work with the physical and the psychological effectively.

Note the areas of pain in the trapezius muscle (noted as an “X”) and also see where pain is referred into the head and face. These trigger points are VERY common when one has a TMJ problem. Therefore, TMJ doctors should work with and refer patients to chiropractors or physical theapists.

The sternocleidomastoid muscle (SCM) is a large muscle on either side of the neck. It attaches to the sternum, the clavicle (collar bone), and the mastoid process of the temporal bone of the skull, right behind the ear. This very important muscle often develops trigger points (with or without a TMJ problem) and frequently causes forehead headaches, which are often misdiagnosed as frontal sinus headaches. Also, trigger points in the SCM may cause pain in the ear, over and around the eye, the chin, and below the eye (which may cause a misdiagnosis of maxillary sinusitis). Again, you can see how important consultation with a chiropractic physician could be when one is suffering with trigger points in the SCM. 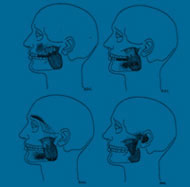