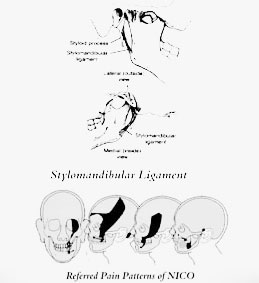 Listed below are common pain disorders, along with a brief description of each, that are often misdiagnosed as TMJ problems.

Temporal tendonitis has been called “The Migraine Mimic” because so many symptoms are similar to migraine headache pain. Symptoms include: TMJ pain, ear pain and pressure, temporal headaches, cheek pain, tooth sensitivity, neck and shoulder pain. Treatment consists of injecting local anesthetics and other medications, a soft diet, using moist heat, muscle relaxants and anti-inflammatory medications, and physiotherapy. Only rarely (in approximately 4% of cases) is surgery needed. 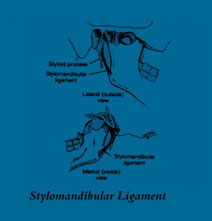 This TMJ-like problem involves the stylomandibular ligament, at tiny structure that connects the base of the skull with the mandible, or lower jaw. If injured, this structure can produce pain in as many as seven specific regions of the face, head and neck: the temple, the TMJ, the ear, the cheek, the eye; the throat, especially when swallowing, and the lower back teeth and jaw bone. Treatment of Ernest syndrome, which is successful about 80% of the time, consists of injections of local anesthetic and medication (cortisone or Sarapin), physiotherapy, and at times, the use of an intraoral splint.

Occipital neuralgia is generally ignored in the medical textbooks. This disorder is characterized by pain located in the cervical and posterior regions of the head (these are the occipital areas) which may or may not extend or radiate into the sides of the head and ultimately, into the facial and frontal regions. There are actually two major types of occipital neuralgia: lesser occipital and greater occipital, with the lesser type being more common.

Trigeminal neuralgia is a terrible disorder of the trigeminal, or fifth cranial nerve. This is one of the most painful problems that plagues human beings. In fact, its description first appeared in the scientific literature in 1672. Another common name for trigeminal neuralgia is tic douloureux which literally means unbearably painful twitch. Far too often, when a person is suffering with severe facial pain with no apparent cause, the diagnosis given is trigeminal neuralgia. Because of this, the patient may be subjected to medications and even very serious surgical procedures which may not be necessary. The symptoms tic douloureux are very characteristic: sharp electrical pain which lasts for seconds. This pain is triggered by touching a specific area of the skin by washing, shaving, applying makeup, brushing the teeth, kissing, or even cold air. The second division of the trigeminal nerve (the maxillary division), which supplies feeling to the mid-face, upper teeth and palate, seems to involved most. The pain is so severe that the sufferer will do virtually anything to avoid touching the trigger zone, producing the pain.

In contrast to the typical type, atypical trigeminal neuralgia seems to cause pain constantly with the intensity increasing and decreasing. There are trigger zones with this type; however, there also is an area of dull aching which is intensified by touching the trigger zones. All three divisions of the trigeminal nerve seems to be affected equally. A common cause of this disorder is trauma, especially after a surgical incision or blow to the face.

As recent as 1979, a newly described pain disorder was reported. This disorder, which came to be known as osteocavitational lesions, produced pain similar to trigeminal neuralgia, both the typical and atypical types. In fact, usually these patients are diagnosed with trigeminal neuralgia. The diagnosis is complicated by the fact that the x-ray examination of the bone is usually normal.

These bony lesions oftentimes develop in jaws and produce little or no pain whatsoever. They may lie dormant for years and sometimes never become painful or cause a problem. Those that produce pain are termed NICO (Neuralgia Inducing Cavitational Osteonecrosis) lesions.

NICO lesions produce referred pain patterns which also serve to confuse both patient and doctor. However, just like trigeminal neuralgia, there are trigger areas that, when pressed, produce pain. These trigger areas develop directly over the areas of affected bone. The mandible, or lower jaw, is affected more often than the maxilla, or upper jaw. One important aspect of NICO is a history of tooth extraction usually years earlier. Any tooth area may be involved. However, lower back teeth seem to be most common. Small areas of bone actually die, producing neuralgia-like pain symptoms. It appears that after a tooth extraction, a NICO lesion may develop due to injury of the blood vessels in the area which ultimately results in poor circulation, resulting in bone death in some cases. Pathologically, this is termed osteomyelitis. This slow bone death has been known for years and occurs in every bone in the body. Other common bones affected are the hips and knees.